Our common areas set us apart

From the pool to the back deck we haven't missed a detail. Our heated pool boasts an 8 foot depend and an extra large pool deck for lounging. Our covered back porch is great for an evening glass of wine. Each house has living rooms and kitchens for guest use. We equip the kitchens with cookware and everything you need to have a meal. Living rooms are great for a card game or catching up with your Hokie while in town. 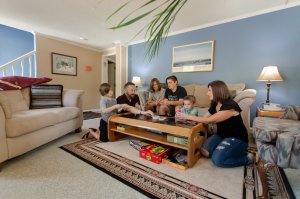 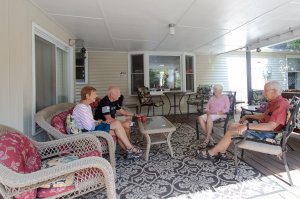 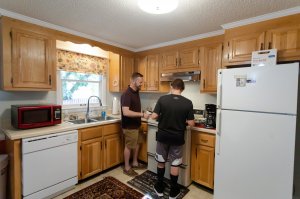 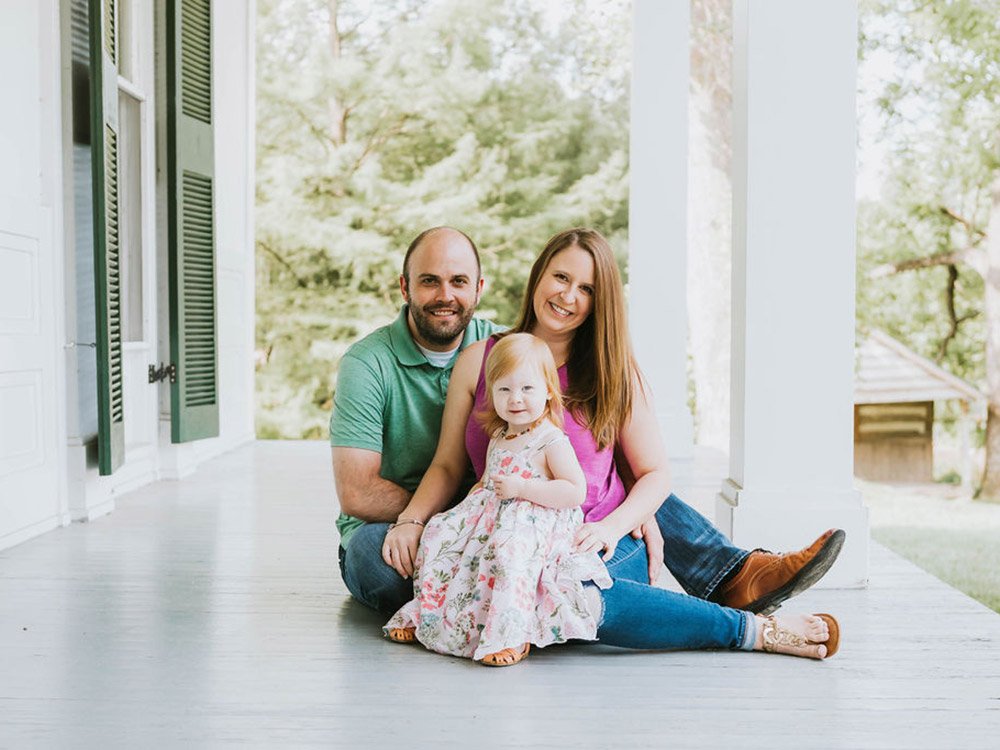 Joshua and Jenna were both raised in the New River Valley and had a deep affection for Blacksburg and the area. They are happiest outside exploring and spending time with their family.

Joshua is a graduate of Virginia Tech with a degree in business. His passion has always been hospitality, managing several hotels and restaurants in the area. He spent five years in the Outer Banks of North Carolina managing boutique hotels only to return to the beautiful mountains of Southwest Virginia.

Jenna is the Operations Coordinator at the Virginia Tech Corporate Research Center, just down the road. She also has history in hospitality before branching out to property management.

They reside in Radford with their daughter, Aniston, who adores swimming in the backyard pool and exploring all the nooks and crannies at Clay Corner Inn.

Together, their passion is creating memories that last forever.

Clay Corner Inn's main house is a Depression-era brick structure built in 1929. There is a porch light and exterior steps outside the back door, which implies there was either an entrance or the house ended here and was added on to later. Another porch light and exterior brick stairs can be seen outside the office, and we know in the early 1990s that this served as a private, 2-story apartment rental.

The twin cape-cod style houses facing Harrell Street, the creative deck system and swimming pool were all added in 1989. The late Vic Huggins, a cherished art professor at Virginia Tech and his wife, Pat, had the houses built for her mother and aunt, sisters who did not get along, but spoke by phone often. The aunt moved away after a year, and the mother passed away a couple of years later. After some wrangling with the Town of Blacksburg, the Huggins secured a permit for the first Bed & Breakfast business in Blacksburg. It opened as Per Diem Bed & Breakfast around 1991.

Joanne & John Anderson purchased the property in June of 1994, with explicit goals of building a profitable lodging business. The phrase "per diem," Latin for "by day," can refer to the government lodging rate, and the inn was often perceived as being owned by the government or Virginia Tech. The Andersons changed the name to Clay Corner Inn a year later. They acquired the property next door, totally renovating the Huckleberry House and opening four more guest rooms with private baths. The building is no longer part of the inn property, though the brick paver parking lot they installed remains as an access point at the end of the twin houses.

The Andersons brought Clay Corner Inn to the forefront of lodging in town before many of the in-town hotels were built. They closed in June of 2004 to care for her parents, then re-furnished, re-stocked, and re-opened with 8 guest rooms and suites in the original three buildings in March of 2008.

In 2011, the Andersons sold Clay Corner Inn to Rick and Nicky Alvaro, who had relocated to Blacksburg from California. As their grandchildren came along, they wished to move closer to family, and Katy and Pawel Nazarewicz purchased the property. Joshua, alongside his wife, Jenna, have managed Clay Corner since that time, and have recently purchased the business with all the hopes and enthusiasm of anyone who loves the Bed & Breakfast segment of the hospitality industry. The charm, appeal, and location drew us in like it draws so many of our guests from around the world.

The ONLY Choice for Hotels in The Area

"This hotel truly is an exceptional choice for anyone staying in the Blacksburg area. It’s not just the cleanliness of the rooms and the property, but also the professionalism of the GM, Josh, and his team. They go out of their way to show appreciation to each guest. No other property offers the grounds and amenities to provide a time to unwind after work. We will continue booking our team members at Clay Corner!"
-- TNT